A meteor shower pelts the earth with strange debris on Christmas Eve. The US power grid fails due to the impact of a large meteorite. The dust plume causes severe illness and death as it blows east across America. As a result the government quarantines the entire northeast. Military personnel wearing gas masks patrol the edges of the affected area, preventing anyone from crossing. But when the dead start coming back to life and eating the living, the US braces itself for a full-on zombie outbreak that no military barricade can keep contained.

The Lazarus Impact is a fast paced, high intensity, peri-apocalyptic zombie action thriller that traces the stories of eight unique and diverse characters as they travel through the madness, trying to head west past the quarantine to 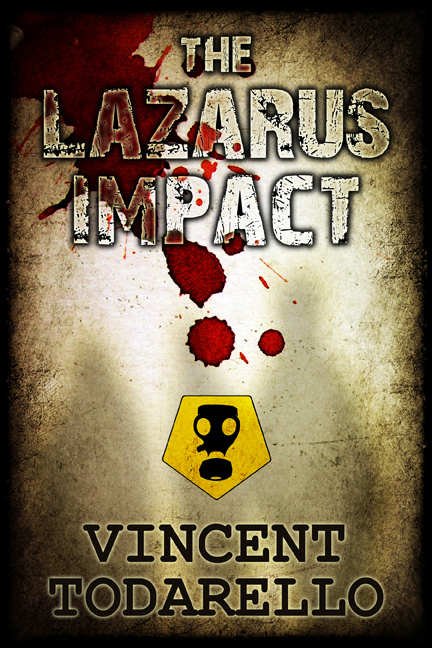 …or so they think.

Wolf, an extreme survivalist television personality, is the first one on the scene when the meteors hit, filming the damage. Dr. Vogel, a former infectious disease lab rat turned physician, is on a mission to get to the CDC to give them samples of what he thinks might be the basis for a cure. Willy, an old, hardened, Vietnam War veteran suffering from PTSD, witnesses the outbreak as it ramps up in intensity at the hospital where he works as a janitor.

Sheryl, a suburban housewife, learns of the dust when she gets a call from a neighbor that her boys are sick on the football field. Marcus, a reformed prison inmate with a violent past, escapes with a band of unscrupulous marauders during a riot. Michael and Amy, a bickering couple from NYC, struggle to get out of Manhattan despite the bridges and tunnels being barricaded and locked down. And Brandon, an awkward teenager with an obsession for horror comics and video games, hides out in his parents’ Cold War era bunker until he runs out of fuel.

“The author gets you hooked right from the start with exciting and descriptive narratives. Although this story ranks second on my list behind Sean of the Dead, the set up for the sequel has me thinking this could become my favorite.” – Poos!

When their paths intersect they must help and rely on each other for survival. The plan is to move west, past the quarantine, and make their way to a secure compound where people have been preparing for doomsday for decades. But the nightmares they face on the way west are only a shadow of the dangers they may encounter on the other side of the quarantine, where the American people have taken up arms to defend their new but porous borders.

Will any survive the journey? Is it even worth it?

This error message is only visible to WordPress admins